Spoiled in Spain, Part I: The Food Bits

I apologize in advance. This is my first travel post since I've returned to blogging. Please forgive it all it's faults!

Last year, the Irish Chef and I travelled to Spain for the month of August. After leaving China, we needed to go to a place where pollution, censorship and the hustle and bustle of people and life wouldn't be part of the culture. We chose to detox in Granada at a very sweet Airbnb that was very close to the Alhambra: https://www.airbnb.ca/rooms/1002465?source_impression_id=p3_1582551748_7PuyGXIE%2BGxix6vc. Guillermo was an amazing host, and I highly recommend his place!

While I think that the slower pace of life was what we needed, we didn't realize how long people and businesses siesta. It was probably something we should have researched, but I was so busy before leaving Shanghai that I was working up until the day we left the country. So, if you didn't know about siestas before, you've been warned. Siesta will interrupt your day if you want to shop and maybe if you want to eat out. For us, it was only inconvenient when we wanted to go grocery shopping. Otherwise, siestas weren't an issue. We did a lot of cooking, but we went out for food once in awhile. However, the culinary highlight of our time in Spain was a food walking tour. Our host was very informative and helpful. She hails from England but has lived in Spain for over 20 years and speaks fluent Spanish. She took us to some great spots that served amazing food! It was worth every penny! You can book a reservation here: https://www.spainfoodsherpas.com/granada/taste-of-granada-food-tour/. 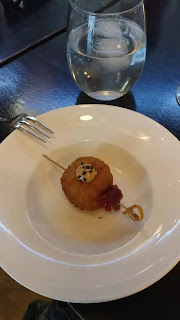 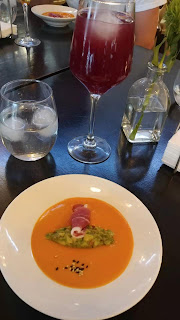 Gazpacho (soup) & tinto de verano (red wine and lemonade/lemon soda). I highly suggest AVOIDING the overpriced, sugary sangria in favour of the more refreshing and lesser-known tinto de verano. By the way, the food was so good at this restaurant that we returned here for lunch another day: 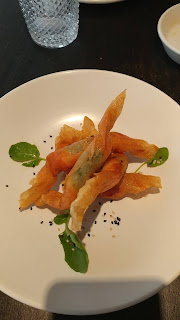 Appetizer: Shrimp wontons. They also served bread with SMOKED BUTTER. I looked everywhere and asked everyone if they knew where I could buy smoked butter, but I was never able to find it :( 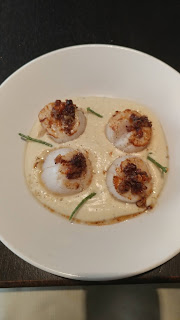 My Main: Scallops with cauliflower mash 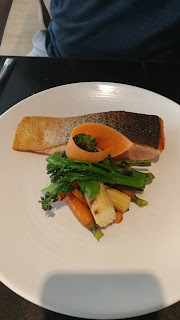 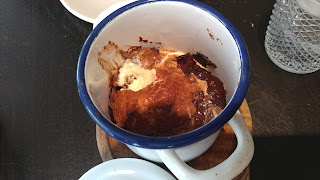 Back to the food tour! We met a man and woman on this tour. The woman admitted she thought that the store owner of Thérica was hot (He's pictured below. Store address: Carrera de la Virgen 44, Granada). 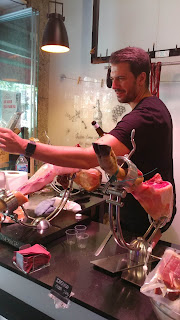 As someone who doesn't enjoy pork, this was quite delicious! Yes, that's a pig's leg...It was a bit...Weird. We were given wine as well.

We ended up a place called Oliver. Oliver was like a teeny tiny Bulk Barn/Bulk Barrel. The shopkeeper wouldn't let us touch anything which made me feel happy because it meant that shoppers weren't touching the food with their dirty hands! 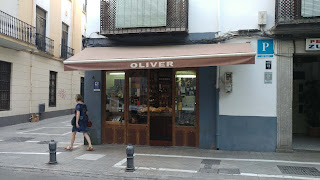 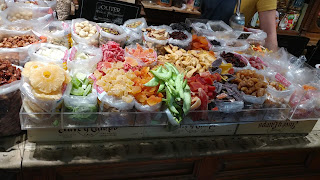 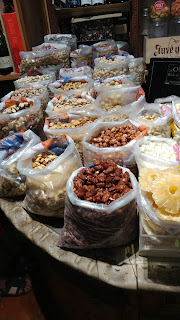 We then went to a small pub-style restaurant (Shame on me for forgetting the name!), where the focus was on the vermut (the drink). This beverage was sooo good, but I was already a bit tipsy from the tinto de verano! The Irish Chef had to help me finish my vermut (Vermouth). I was a very, very happy girl by this point in the evening, hahaha! 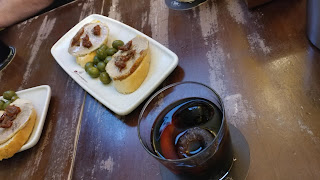 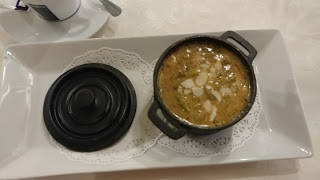 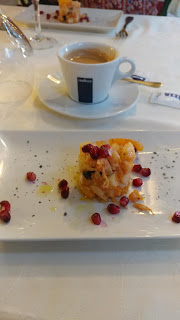 This was something unlike anything I've ever tried before. It's called remojon granadino. It's fish, oranges, olives and egg garnished with pomegranate. That sounded like the oddest combination of food, but it works! This was a bright dish that I wish I'd had earlier in the evening so that I could have enjoyed it more. I was STUFFED. 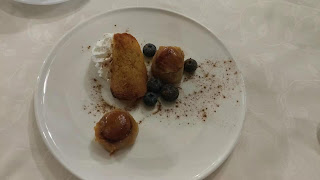 Dessert: Pio nono which tasted like a cinnamon infused baklava. So tasty! 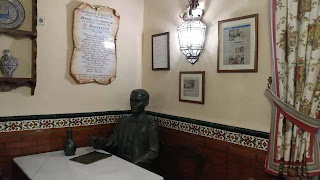 At a corner table, there's a life-size statue of Federico García Lorca. Lorca was a local poet and playwright who used to frequent the restaurant.

Other noteworthy places we found in Granada:

i. Andalucía Delicatessen (https://andaluciadeli.com): We might have bought a lot of wine and cheese here, lol! 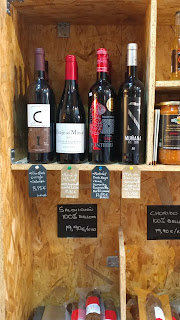 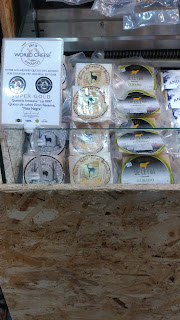 ii. La Casa della Pasta (https://www.facebook.com/lacasadellapastagranada & https://www.tripadvisor.co.uk/ShowUserReviews-g187441-d4026108-r495649340-La_Casa_della_Pasta-Granada_Province_of_Granada_Andalucia.html): We bought yummy pasta from this small takeaway one afternoon. It's well worth a try!

iii. Cocinarte (https://www.facebook.com/Cocinarte_granada-307498829959680/): This is our host's school. He cooked us an incredible meal for dinner the night before we left Granada. 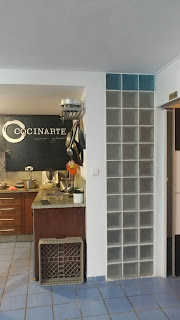 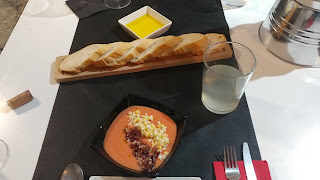 Salmorejo (another cold soup!): I could have just eaten this and the dessert! 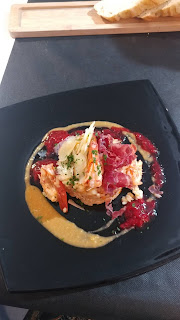 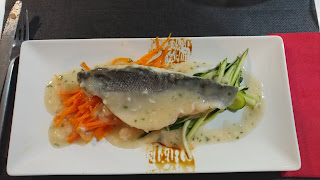 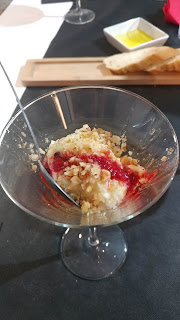 Dessert was mel i mató: cottage cheese, nuts, honey and a berry coulis on top. This was heavenly! I wish I'd known about this dessert waaay before our last day.

We definitely got a feel for the local cuisine while we visited Granada. I was so thankful that when you bought a drink, you'd get free tapas. I was told that Andalucía is the only region in Spain that still offers a free tapas with a drink. I checked the information online here as well: https://www.10best.com/interests/food-culture/the-last-region-in-spain-that-upholds-the-dying-custom-of-free-tapas/. 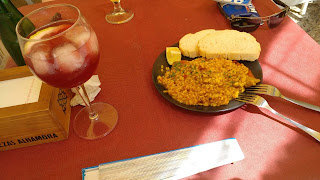 Free paella with my tinto de verano at a bar a two-minute walk from our Airbnb!

If you love food, Granada is a place to visit. I would happily return just to continue eating my way through the city! Please stay tuned. Spain (Part II) will be up soon :) 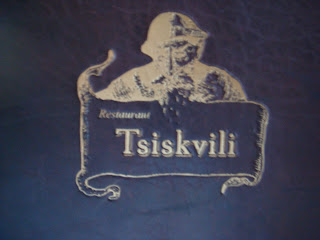 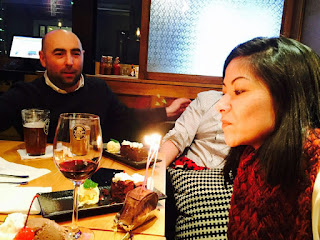